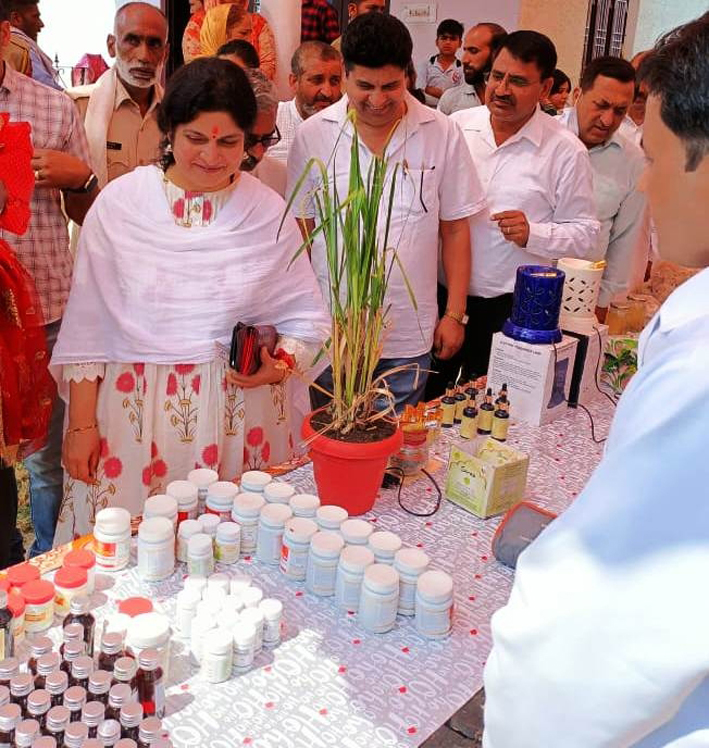 REASI, April 4: The two-day festival at Ohli Mata Mandir concluded today with religious fervor, devotion and enthusiasm.
Reasi District Development Commissioner Babila Rakwal paid tribute to the shrine by participating in the morning Aarti.
The DC Reasi became aware of the dilapidated state of the temple premises and assured the inhabitants of a rapid renovation of these.
She discussed the renovation process of the ancient temple with a team from INTACH and local panchayats and urged the immediate restoration of this iconic and historic temple.
Later, she inspected stalls set up by Agriculture, Horticulture, Ayush and Umeed SHG Akhil Butan.
While inspecting the stalls, she interacted with agripreneur Tilak Raj from Sirah and appreciated the efforts of the department in promoting agripreneurship for lemongrass processing.
She urged the Ministry of Agriculture to offer programs to farmers in the region, especially mushroom cultivation and beekeeping. She also suggested the establishment of Dogra Haat near the temple to explore the possibilities of increasing pilgrimage and the influx of tourists, which was welcomed by PRI members.
District Agricultural Officer (Post) Reasi Rajesh Verma; Deputy Agriculture Officer Guldev Raj; Teshildar Reasi Munshi Ram: Naib Tehsildar Kanjli, Sarpanch Kanjli Sukhdev Singh, members of PRI including departmental field staff were present on occasion.