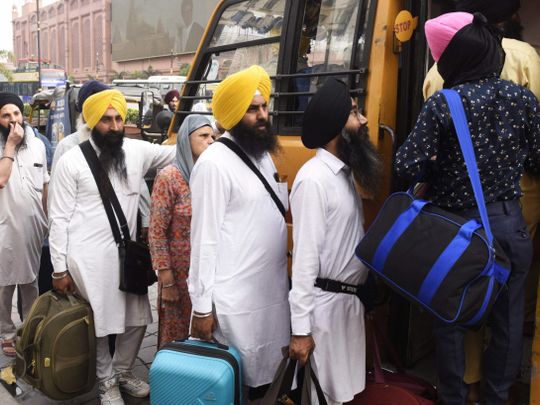 2,200 Sikh pilgrims arrive in Pakistan from India for Baisakhi festival

The Sikh pilgrims were welcomed by officials from the Pakistan Sikh Gurdwara Parbandhak Committee and the Evacuee Trust Property Board (ETPB), which manages minority religious places in Pakistan and provides facilities for pilgrims. Sardar Arvinder Singh, the leader of the Indian pilgrim group, expressed his gratitude to Pakistan for issuing visas in large numbers, allowing pilgrims to participate in the Baisakhi festival.

“We came here with a lot of love for the people of Pakistan,” he said, adding that “this is the country of our gurus.”

The main ceremony of the festival is to be held at Gurdwara Panja Sahib (Hasanabdal) on April 14. After reaching Pakistan via the Wagah border, they will be offered meals and then proceed to the main festival site at Hasanabdal by special buses and trains escorted by the Railway Police and other agencies responsible for law enforcement, officials said.

Hundreds of Indian Sikhs visit Pakistan every year to commemorate their religious and cultural festivals in Pakistan, home to some of the holiest Sikh sites. Sikh pilgrims travel annually under the 1974 Pakistan-India Protocol on visits to religious shrines.

Harry Styles, Lizzo, Kendrick, Aerosmith, Ohana and more of the most anticipated musical events of the rest of 2022