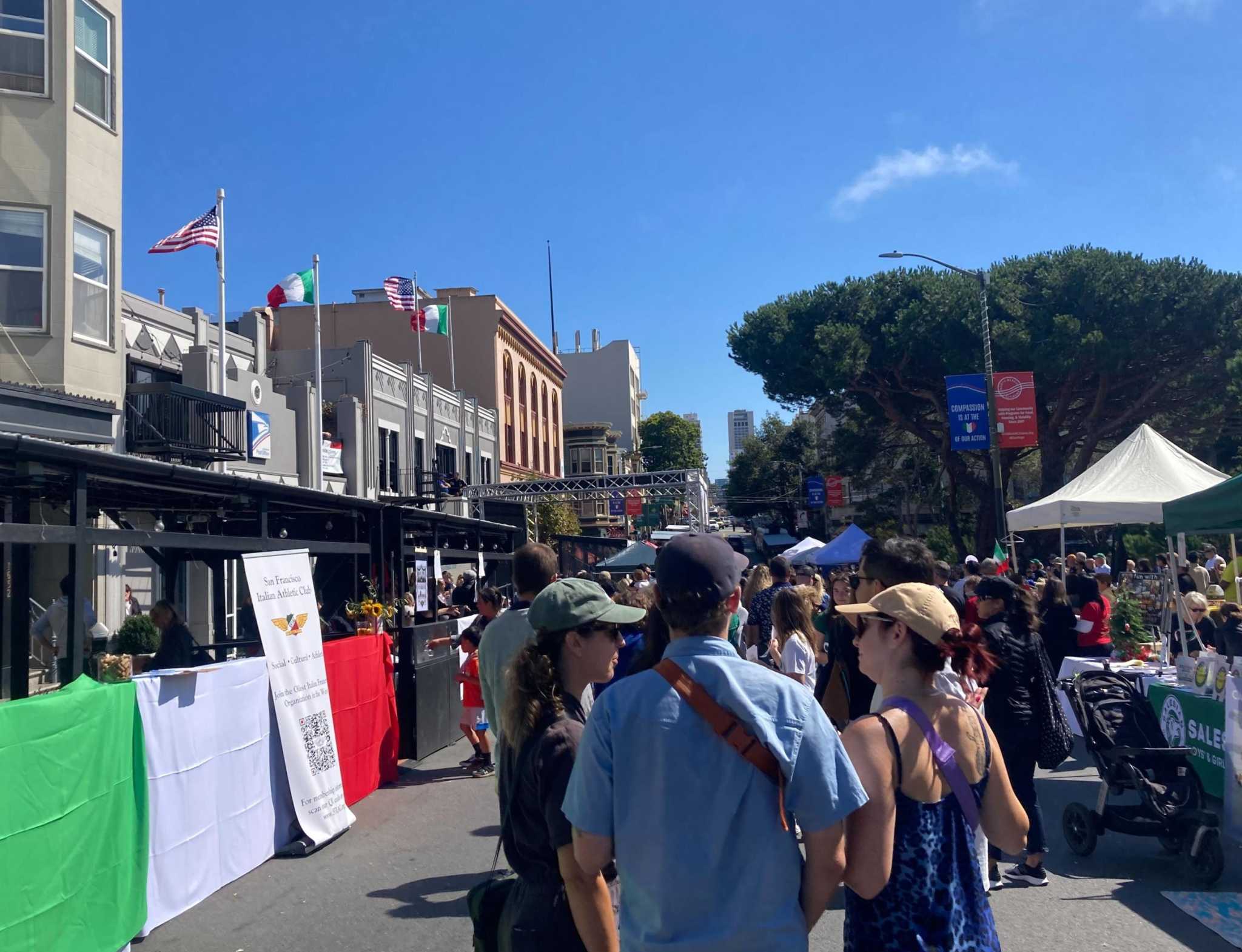 Even for those who don’t have a series of colliding vowels in their last name, North Beach was open to all comers on Saturday for the Festa Coloniale Italiana, an event showing how San Francisco continues to find its way back from the days of the darkest of the pandemic.

Beyond a chance to spill Aperol spritzes in a crowded Washington Square Park, or watch the red wine and red sauce flow as locals and tourists swirled down Stockton Street for upbeat renditions of “Volare” and “Bella Ciao” by Italian jazz/funk band Sonamó, the festival organized by the San Francisco Italian Athletic Club Foundation, was an opportunity to celebrate the neighborhood’s cultural roots.

“We want to promote the Italian language and create a bridge between cultures,” said Martina Di Biasi, originally from Italy, of Istituto Italiano Sculoa, which offers Italian language classes in San Francisco, as she stood at one of the festival stands.

Di Biasi said the event was also a chance for immigrants from the motherland of San Francisco to mingle with Italian Americans, two groups that can sometimes be divided by cultural barriers. And remain deeply divided over something as simple as grating cheese over any type of seafood dish, which in Italy is heresy.

Besides driving fried calamari and meatballs down their throats, the festival outside the Italian Athletic Club between Filbert and Union streets also drove people to stores like Goorin Bros. Hat Shop on the Stockton Street stretch.

“It just benefits us to spread the word,” said store manager Robyn Del Rosario as she sized a wide-brimmed red pork pie hat for a customer. More people poked their heads in the doorway than made a purchase, Del Rosario conceded, but she still praised the San Francisco-based hatter’s flagship store display.

Walking up Union Street toward Grant Avenue, past the full sidewalk tables of Tony’s Pizza Napolitana, the bits of Italian began to fade. But a sense of Italian culture permeated Libreria Pino, where Pino Carboni sat smiling in the vaulted white interior of his bookstore.

Carboni said the festival has drawn visitors, but not as many as the steady stream that pours in from the North Beach Festival over the years when that gathering fills most streets in the neighborhood.

Libreria Pino is the only Italian-language bookstore in the United States, according to Carboni. Given the specialized nature of the store, many of his customers do not come off the street but come in search of his store to purchase a particular title. But, he said, the festival has brought additional customers through the door.

That wasn’t the only event that enlivened the city’s historic northeast corner on Saturday afternoon.

At around 3:00 p.m., as a tenor on the festival stage sang a gripping rendition of “Con te Départò,” one person could be forgiven for not knowing that just a few blocks from Chinatown, nearly all of Grant Avenue was closed for the much larger Autumn Moon Festival.

Stalls with people smilingly selling everything from ginger to popcorn, or announcing trips to the casino, did great business as flute music filled the air and mingled with snippets of Chinese, English , as well as other languages. Together, they indicated that one of the things San Francisco has been missing for the past two years is coming back: tourists.

Kandal Prisoners Ask for Clemency Ahead of Water Festival

Ring in the festivities with accessories inspired by Lord Ganesha