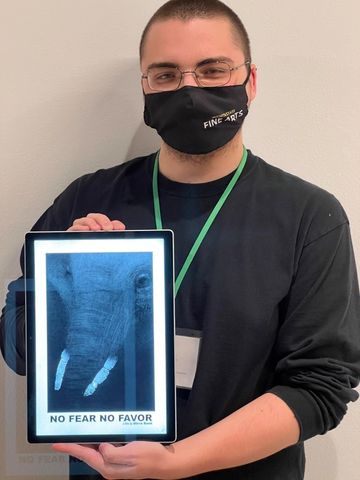 Elementary school teachers encourage young Austin Storie to pursue his artistic pursuits, which led to him winning the review from Tallgrass Film Festival director Mirra Bank with his competition-winning poster designed for the film.

Storie, a senior WSU employee and student at the Ulrich Museum, grew up north of St. Louis, Missouri, but has now lived in Kansas for six years. Currently, Storie is working on her Bachelor of Fine Arts in Fine Arts with a concentration in Applied Design.

Before elementary school, Storie had little interest in the arts. However, Storie’s interest sparked after a few of his teachers encouraged him to look into the art after seeing its potential.

“That interest then turned into a real passion for all types of visual communication, and I haven’t really looked back since,” Storie said.

Since continuing his artistic career, he recently won the Ulrich Museums competition in November for the college division of the Tallgrass Film Festival poster competition with a poster designed for Mirra Bank’s film No Fear No Favor.

When he found out he had entered the competition, Storie said he was arrogantly confident he could take on the challenge and was excited about the opportunity and research that came with the project.

“Before the competition, it was great. When I heard the news this was happening, my first thought, even though it sounds knowingly arrogant, was, ‘I can win if I really think smart.’ Storie said. “I’m very lucky that the research phase leading up to submitting work for this type of competition is a lot of fun for me to go through. So I felt pretty confident even in the early stages.

The film No Fear No Favor depicts the choices African communities must make to protect the wildlife heritage of their lands from the illegal trade that frequently occurs. Much of the documentary focuses on the illegal ivory hunting of African elephants.

“BStarting from my composition around an African elephant rendered in graphite, I recreated its tusks using scans I took of my own ink-printed fingers,” Storie said. “I made this specific decision to connect viewers to the idea that humans have an active role in the degradation, but also the restoration, of wildlife. After making some minor adjustments, I felt that what I had created was conceptually and visually strong enough to be entered into the competition.

Storie received a $100 prize and two film festival passes. Storie said the best prize he got from the contest was the positive feedback from the director as well as the endorsement of other designers and visual artists.

“I had a fantastic experience with the competition. Getting the stamp of approval from designers and visual artists that I greatly respect has been such a validating experience,” Storie said. “I think the most memorable part was hearing such positive feedback from Mirra Bank, the director of the film. Knowing that she was so receptive to the concept and how I chose to portray it visually, it was worth its weight in gold.