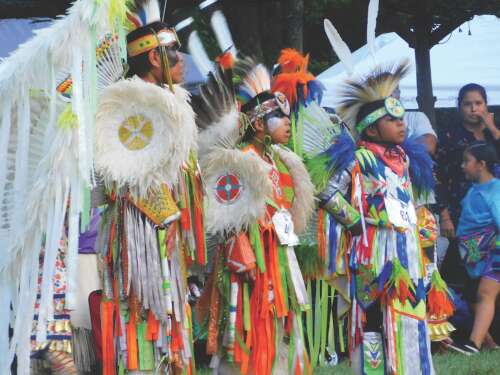 The boys participate in the ‘Fancy Feather Dancers’ dance at a previous festival in Schemitzun. It is one of many dance categories that take place in Schemitzun. (Photo courtesy of Mashantucket Pequot Tribal Nation)

Dancers take part in the grand entrance at the start of the Green Corn and Dance Festival. The festival takes place on August 27 and 28. (Photo by J. Chavez)

Miss Mashantucket Royalty representatives are chosen each year to honor what it means to be a strong Pequot woman. (Photo courtesy of Mashantucket Pequot Tribal Nation)

As summer ends and corn rises in the fields, the Mashantucket (Western) Pequot Tribal Nation prepares for its Green Corn and Dance Festival in late August, a Native American celebration of thanksgiving and firstfruits of the harvest.

Known as Schemitzun (pronounced Ski – MET – zen), the festival is the Mashantuckets’ biggest event of the year, attracting members of neighboring tribes and offering visitors a chance to learn about the Pequots and their history, culture, food and traditions.

COVID forced the festival to close last year to all but tribal members, but this year’s event is expected to draw crowds from Native American tribes across New England and welcome audiences Aug. 27-28, whether rain or shine, just like it has since the 1600s.

For attendees, “it’s a way for Native Americans to give thanks to the creator for our rich heritage while honoring our ancestors, warriors, veterans and elders,” says Wayne Reels, Tribal Director of Cultural Resources and founding committee member of the festival. , established in 1992.

Reels says the festival has dwindled since its early years in the 1990s, when thousands of Native Americans came to Connecticut from across the country and around the world for a four-day event to compete for cash prizes in dancing, singing and drumming competitions. .

“Foxwoods Entertainment actually launched the first Schemitzun and it was an event that all the top performing artists in Indian Country came to, but it was really just a folk music festival,” Reels says of the early years. of the festival. At the same time, a tribal committee was planning a real pow-wow, or sacred social gathering.

It aimed, he said, to reach out to all of the Indigenous peoples who held festivals and powwows across the country and bring them together.

Over the next few years, the festival and competitions grew, attracting world-class Native American singing groups and competitive dancers. With the help of Governor Lowell P. Weicker, the event was moved to the Hartford Civic Center, Reels said. A rodeo was added and by 1996 the purse had reached hundreds of thousands of dollars.

“We brought in every school kid in the state and filled the arena,” Reels recalled. “We wanted to give back to people. It lasted a few years there until we brought it back here,” he says of the Mashantucket Pequot cultural grounds “in the heart of our community.”

Butler’s work was the basis for the 1965 establishment of the Indian & Colonial Research Center, now called the Old Mystic History Center, located on Main Street in Old Mystic.

Apparently, even from the earliest times, Indians from other tribes and settlers enjoyed watching the various dances, Butler wrote.

The Mashantucket Pequots, an indigenous Algonquin people, gained federal recognition in 1983. Their reservation in southeastern Connecticut was established in 1666, nearly 30 years after the tribe survived what is known as the ” massacre of the Pequot”, a raid by the English on a mystical Indian. village that killed 500 tribesmen, including children.

Today, the Mashantucket Pequot Tribal Nation owns and operates the Foxwoods Resort Casino and various other businesses, including the Lake of Isles Golf Course, the Pequot Pharmaceutical Network, and the Norwich Inn Spa. The tribe is one of Connecticut’s largest taxpayers and largest employers, and has contributed billions of dollars to Connecticut through the first-of-its-kind tribal gaming revenue-sharing agreement, signed into law in 1993.

Since bringing the festival back to the reservation, Reels says it’s become “the powwow of the area,” allowing the tribe to perform many sacred ceremonies they couldn’t do when they were bigger.

“We are now able to do our bagpipe ceremonies, corn dance ceremonies, naming ceremonies and all the things that happened a long time ago,” says Reels, who grew up in the Indian community of Narragansett. on the south coast of Kingstown, RI

“I came here a lot in the ’60s when I was young,” says Reels of the Pequot potlucks he attended with his family in southeast Connecticut. “Back then, for the Pequot side of my family, their get-together powwow was really just a potluck.”

The Narragansetts, he recalls, held a larger celebration called the August Reunion. “It started as a dance and a gathering to keep our identity alive. It was really a family reunion,” he recalls.

After moving to Connecticut, Reels says he approached the Mashantucket Pequot Tribal Council to form a powwow committee.

“I walked in and we unanimously agreed to have him,” he recalled. “I don’t think anyone thought we would have the scale that we have. That first year it was known as one of the biggest events in the world, with many Aboriginal people traveling, some from the farthest reaches of British Columbia in Canada and others from across the map. Just being willing to go through this long journey to be part of it was exciting for us to see.

Cutting the festival down to just two days, he says, “allowed us to really focus on ourselves and our traditions”.

There’s still a lot of dancing, he says, although instead of thousands of competitors, attendees only see hundreds marching and participating in dance ceremonies, like the grand entrance, when dancers of all ages enter. on the festival grounds (Saturday at 6 p.m., Sunday at noon).

“During the grand entrance, the dancers line up to enter the arena,” Reels explains. “At this time, we will have a guard of honor, dignitaries, royalty and elders who will line up with the dancers according to their category or age.” They enter with the music of an entrance chant, he says, then a flag chant and a victory chant, to begin the ceremonial dances.

Ceremonies include a flag raising honoring tribal veterans who have served, he says, “from the Pequot War to the present day. … Every year we raise the flag in their memory and announce their names. This is something that is done all over the Indian world. Veterans are still considered warriors and still honored in our own way.

Tickets are $15 for a day pass ($10 for ages 55 and older and children 6-12, free for children 5 and under) and $25 for a pass weekend. Parking is available at the Fox Tower Hotel, Grand Pequot Tower Hotel, Great Cedar Hotel, and Mashantucket Pequot Museum & Research Center (disability only), along with a shuttle to the event site.