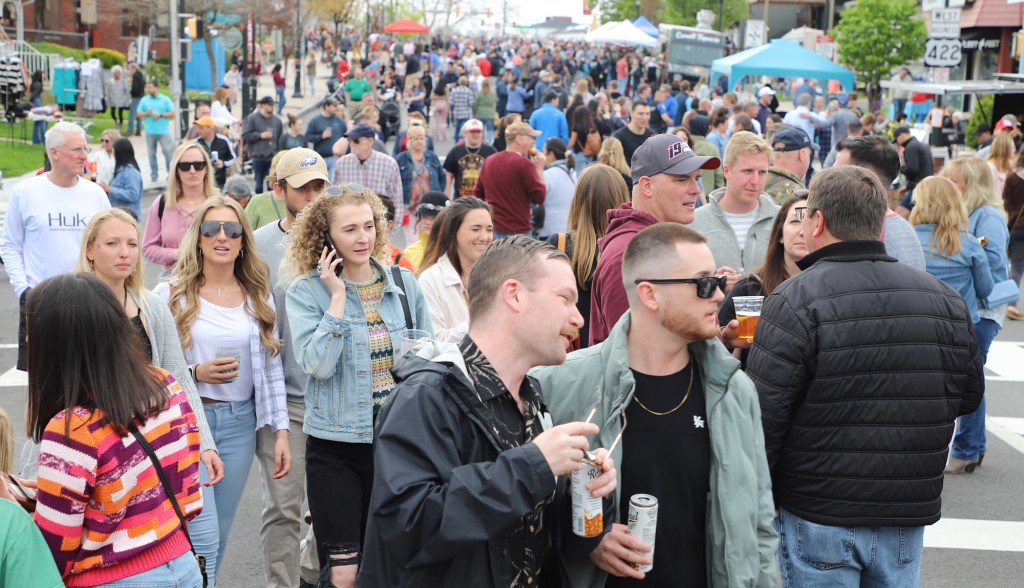 Like the intertwining twists of a pretzel, good times bonded friends and strangers on Saturday afternoon in West Reading during the fifth annual Craft Beer and Pretzel Fest.

Freshly baked dough was the star of the show along a closed Penn Avenue, as crowds drifted between breweries and food stalls offering their own version of a timeless combo: pretzels and beer.

“We went through 250 cases of pretzels today,” said Heather Hillman of Unique Snacks, Muhlenberg Township, which was giving out free bags of pretzels. “We brought 200 and went back to the bakery twice for more.”

True to its name, Unique Snacks was the only stand that also offered pretzel necklaces, coaching onlookers as they transformed curvy treats into high-carb jewelry.

“Pretzels for the puppies, every pup gets a pretzel,” one of the Unique Snacks booth workers shouted as he handed three bags of pretzels to a family walking a squad of Yorkies.

The dozens of tents lining Penn Avenue in West Reading were a familiar site to West Reading regulars, of which there are many – attendance at the borough’s several major annual events often number in the thousands.

Along the avenue, strangers greeted each other, friends and family reminisced, and couples casually bickered. Most did it while sipping a beer.

This correlation between beer and fun times is no coincidence, according to Amanda Levering, director of events for Sly Fox Brewing Company.

“I feel like you can connect with people on any beer. It’s never negative, usually,” Levering said, “you’ll always have a good story. It’s a good memory. “

Wilkes and his wife Marcy, 75, said they always make it a point to come to Penn Avenue events.

But longtime attendees weren’t the only ones stopping by West Reading for a bite to eat on Saturday.

“I’m a transplant from Pittsburgh. I just moved here in Wyomissing,” said Lorri Wildi, as she enjoyed a late lunch of pretzels and tacos from Chatty Monks Brewing Co. “It’s my first time. Everything is wonderful. It’s so much fun.”

His tablemates Scott Coady and Randee McCallum picked out a pile of loaded nachos.

Around 2 p.m., wrestling fanatics lined up at Sixth Street for the appearance of five-time WWE World Champion Drew McIntyre.

By the time McIntyre appeared, the line had stretched nearly two blocks.

Saul Aul, along with children Anthony, 7, and Kathlynn, 11, stood for more than two and a half hours at the front of the line to have their replica WWE Championship belts signed by the Scottish legend known to fans under the name “The Chosen One”.

The wait was worth it, according to John King of Hamburg, who also had a belt signed by McIntyre.

“I’m a huge McIntyre fan. It was nice to meet him here in Reading,” King said. “We should have more things like that to do here. It’s a good time. The whole festival is a good time.

King said he grew up watching wrestling and was heading to Santander Center on Saturday night for WWE’s main event, where McIntyre could perform his signature move: “the claymore.”