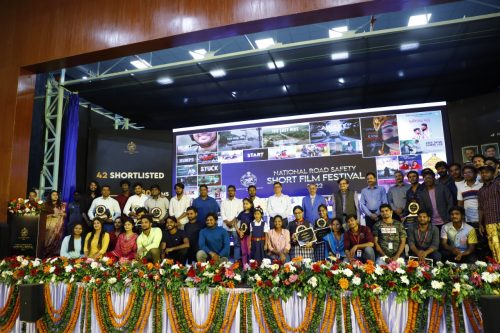 Puri: ‘Rakhi’, a film based on the brother-sister bond and directed by Manmay Dey from Balasore was awarded as the best film in the Odia category and ‘The Power of 2 Sec’, directed by Pankaj Gupta from Bangalore, in non-Odia category at the National Road Safety Short Film Festival, 2022.

Speaking on the occasion, Justice Muralidhar said: “The issues raised in road safety films are very relevant. I hope this festival will raise awareness about safe driving habits and help us reduce road accidents and related fatalities. This festival is also a revelation for the judiciary.

In his address, Justice Murahari Sri Raman urged to focus on liability insurance for all vehicles, free treatment of trauma patients for the first 48 hours after the accident, blood donation and a well-equipped ambulance at regular intervals on the roads.

Sunil Kumar Bansal, DGP, Odisha said, “Movies have a powerful impact on audiences. Road safety films will be a eureka moment for thousands of people. Festivals like this will help raise public awareness of road safety. I urge everyone to wear a helmet when riding two-wheelers. It will save huge lives.

A total of 230 entries were received from across the country for the competition which was open until June 10. Filmmakers, amateur cinephiles and students submitted entries in the form of documentary, experimental, storytelling, fiction, non-fiction and animation. There were entries in many non-Odia languages ​​including Hindi, Telugu, Malayalam and English on various aspects of road safety.