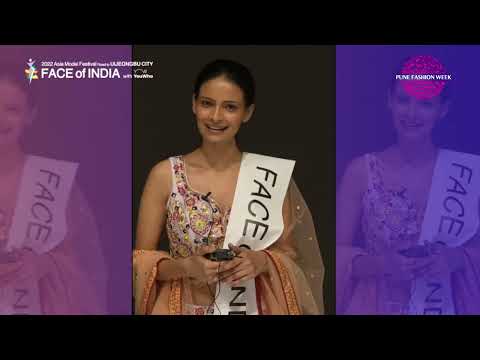 PUNE, India, September 14, 2022 /PRNewswire/ — Asia has become a notable force in the fashion industry. It is rightly said that if a proportion of Asian customers increases by one unit, the proportion of Asian models also increases the following year. Asian models around the world have reached the top leads, impacting this industry known for its need for greater diversity and representation.

Everyone from fashion, glamor and culture was present as candidates everywhere India walked fiercely up the ramp to be the next face of India 2022 with renowned designers such as Amin Farista (Gandhian Fab Collection), Niti Singhal (Twee in One collection), Bhavini Parikh (Bunko Junko Collection), Ivodia London, Sumit Das GuptaAshok Maanay (Suroor Collection) and Siddhant Agrawal. The collection presented was a beautifully woven story through sustainable fashion in different styles.

Alisha Chandrakar of Bhilai, Chhattisgarh, Vedant Mahewar of Nanded, Maharashtra, Ravi Naval of Bombay, Niharika Joshi of Gujarat, Kriti Karmakar of Gauripur, Assam & Rohit Rana of Chalisgaon, Maharashtra were crowned as the face of India winners and qualified for the semi-final of Face of Asia2022.

After an extensive ballot through Asia through online and social platforms, Kriti Karmakar and Ravi Naval were declared winners to represent India and compete with winners from 26 other Asian countries for the most coveted ‘face of Asia‘ title which has a cash prize of $100,000.

“India is a country with high potential for global development, and FOI has been a cultural exchange platform for India and South Korea. Let’s hope for good results when Indian winners come to Korea. I am convinced that the AMF will be an opportunity for exchanges between the fashion and beauty industries between the two countries.,” Yang Eui-Sik, Chairman of the AMF, said.

“This year, the MFA will be held in Uijeongbu in Gyeonggi Province, north of Seoul, South Korea which has also been dubbed a “military town” because it hosted the US military for seven decades. The ultimate goal of organizing such an event is to transform Uijeongbu into a fashion and beauty hotspot in Asia,” said Mayor of Uijeongbu Kim Dong-geun.

Mayor of Uijeongbu Kim Dong-geun also plans to hold Uijeongbu’s flagship festivals like the ‘Hoeryong Cultural Festival‘ and ‘Haengbokro Festival‘ at the next MFA. He also announced that this year, the winners of the next Face of Asia competition will become the promotional ambassadors of Uijeongbu.

Talk about the contest Mr. Badal SabouPresident, Face of India and Managing Director of Pune Fashion Week, shares, “It is no doubt an immense joy to see the best Indian models on this world stage. This pageant has surely brought the best opportunities for aspiring models across the country. AMF is a great concept and initiative that opens business opportunities between 27 Asian countries including India. I was associated with South Korea and, especially the AMF for a long time now, and it makes me proud to see how welcoming and open both countries are to the economic and social development of the people of their countries and taking bold steps to invest in various sectors. I am happy to have managed to open the doors of the fashion industry both South Korea & Indiaand I hope to be able to do the same with the other sectors. India is at its peak of development and it is a good time for Korean companies to look up to India particularly in the R&D and technology sector.“

“I hope that I can play the crucial role of being a fair representative for both countries, as both countries have set themselves the goal of increasing bilateral trade for $50 billion by 2030. Now is the right time and the perfect opportunity,” added, Mr. Badal SabouPresident, Face of India and Managing Director of Pune Fashion Week.

Sonigara Corp. also teamed up with Face of India and Ispear ‘Code name Vogue‘a new ultra-trendy residential project near Aundh, on a plot of land of over 9 acres. This property will add a fashionable feeling to the city and claims to create a New Aundh in Pune.

Let’s talk about the launch Mr. Rajiv Sonigara, Co-Director, Sonigara Corp said, “The new property of Sonigara Corp ‘Code name Vogue‘ is truly a one-of-a-kind project aiming to set the highest standards in luxury and fashionable real estate offerings in Pune. We allow the community to make their style statement through their new address. It will create the next benchmark in fashionable living with cutting-edge design and the trendiest lifestyle.“

“The glamor associated with the iconic face of India is matched only by Sonigara’s standards for delivering unique homes and lifestyle experiences,” added Sachin Sonigara, Co-Director, Sonigara Corp.

To promote the recognition of blogging as a profession, the Bloggers Alliance Education Society (BAES) and Pune Fashion Week have chosen to proudly announce the launch of the Pune Bloggers Alliance in the face of India event and named Mr. Badal Sabou as President of BAES Maharashtra Chapter.

The event also recognized various winners of India who have contributed enormously in their fields with Face of India Achievers Awards 2022.

Here is the list of some of the eminent personalities of Pune who attended the event and added their charm to the occasion.

It was an evening full of glamour, passion, competition and style.

Asia Model Festival (AMF), sponsored by the Ministry of Culture, Sports and Tourism Showcasing Asian models and the fashion and beauty related industries around the world. AMF is also a global cultural content platform that showcases global brands and artists from Asia.

In association with the AMF, Pune Fashion Week (PFW) has launched Face of India in 2014. It was the first time India participated in the AMF, the largest and most prestigious platform for from Asia fashion fraternity. Based on their talent and aptitude, candidates are selected for the final stages of the competition. The winners will represent India at the Asia New Star Model Contest 2022 at the AMF, October 12 – 16, 2022 in Uijeongbu.

The Stevensville Scarecrow Festival will be full of fun

What to see at the 2022 Oakland International Film Festival