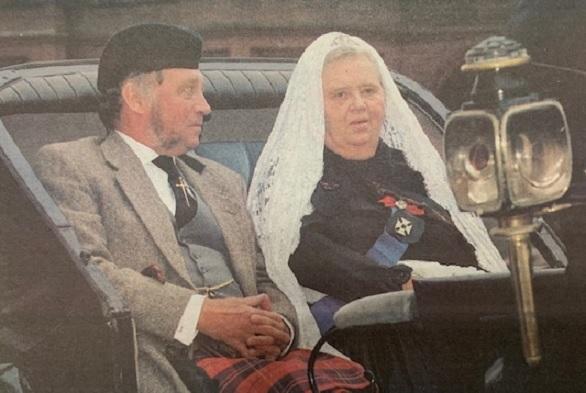 Over 20,000 people flocked to Ulverston during the last weekend of November 2004, helping to make the sixth annual Dickensian Christmas Festival a huge success.

It was like stepping into a scene from a Dickensian novel with smartly dressed gentlemen and elegant ladies in period costumes walking the cobbled streets.

Against the backdrop of festive carols and the smell of roasted chestnuts in the air, the two-day festival, sponsored by the Evening Mail, was a great success.

Marking the start of Ulverston’s Christmas season, the festival offered plenty of entertainment, with marching bands, choirs, a flea circus, street entertainment, Punch and Judy, street organs, a railroad at steam and a funfair.

It was estimated that more than 10,000 people attended on Saturday. The huge crowd gathered to see the grand procession around the city.

Santa Claus appeared on a horse-drawn wagon from the brewery and Bill Sikes and other Dickensian characters marched through the streets.

There was a period costume competition with prizes for the best adults and children in costume and Ulverston Mayor Cllr John Birkett turned on the Christmas tree lights in Market Place.

This was followed by the lighting of tree lights in County Square during a service for St Mary’s Hospice Celebrate A Life appeal, which raised around £20,000.

He said, “It’s been really good. The crowds have been huge.”

Peter Winston, festival secretary, said: “From all the feedback I’ve had from traders I think we had record crowds on Saturday.

“Looking at the weekend as a whole, we had well over 20,000 visitors and that could well be approaching our record number.

“It was definitely a great weekend with a great atmosphere.

“People certainly got into the spirit of the occasion. I was very impressed with how many people came out in period costume.”

Visitors came from as far away as America, China, France and Belgium and coaches came from all over northern England.