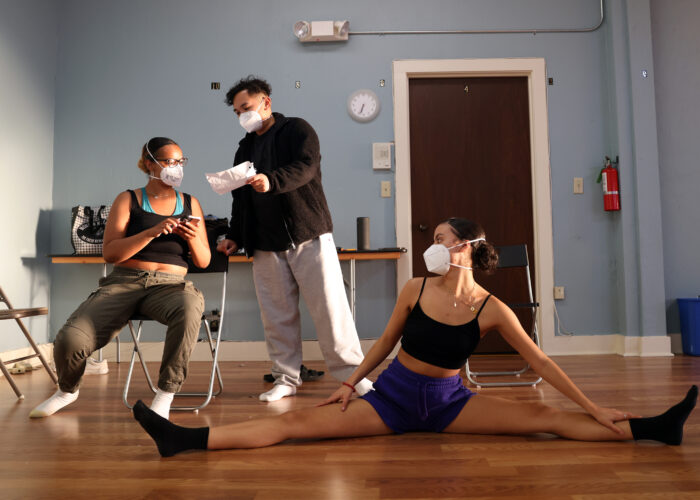 On September 9, 2020, it didn’t matter where you lived in the Bay Area, or your socioeconomic class, race, or creed. When you looked out the window or stepped outside that morning, the sky was a post-apocalyptic orange, the result of multiple wildfires raging across the West simultaneously.

Now, the day that united our region for all the worst reasons is the subject of “The Day the Sky Turned Orange,” a theatrical concept album performed in a production currently being produced by the San Francisco Bay Area Theater Company in as part of its new Racines Theater Festival.

The piece doesn’t just make music about pivotal recent history. It is an opportunity to come together and process unresolved collective trauma.

“People want to talk about it,” musical director, songwriter and performer Olivia Kuper Harris said in a band interview ahead of a recent rehearsal. “It’s so rare that we receive a sign, so rare that the Earth speaks to you.”

The New Roots Festival — which runs Friday through Sunday October 14-16 at the Brava Theater Center — is dedicated to bringing arts companies of color together and giving them a space to experiment. Other works featured include a new draft of “Sign My Name to Freedom,” featuring music by Betty Reid Soskin, until recently the nation’s oldest working ranger; “Halie,” the Lorraine Hansberry Theater’s ongoing musical about Mahalia Jackson; and “Every Saturday Night”, a play by Danny Duncan about the Fillmore neighborhood in the 1950s.

Harris watched the events of “The Day the Sky Turned Orange” from afar, but as a Los Angeles resident, she’s no stranger to wildfires. When she was assigned to write the album – she and SFBATCO Artistic Director Rodney Earl Jackson Jr. and Outreach Coordinator and Literary Officer Aidaa Peerzada all lived together as undergraduates of the ‘Carnegie Mellon University – she started by conducting interviews, with SFBATCO connections and strangers on the street and in grocery stores.

“People with an existential crisis were a very big line of passage,” she recalls.

The orange sky faded. But Orange Skies Day is forever

The orange sky was the Bay Area’s latest extreme weather event. It won’t be the last

“There was a feeling of, how much more can we take?” Jackson said from his own memory of that day. “We were already in the heart of the pandemic, six months at home. The community rallied behind George Floyd and Breonna Taylor just in the middle of summer. Hopes that the pandemic was gone had just been dashed, and then the skies turned orange above all else. It was already dangerous to share the air indoors with other people; now the outside air was also dangerous.

Jackson said he commissioned this piece in part because fighting climate change is a precursor to all other progressive causes. “Without the Earth, we cannot talk about George Floyd. We cannot speak of racial inequality. We cannot talk about same-sex marriage,” he said. But he also wanted to do more than just vote or spend discretionary income thoughtfully or post on social media. “How can my generation be billed? I think we can with Olivia’s music.

For his R&B, pop and soul numbers, Harris tries to create an “existential”, “cloudy” sound using reverbs and synth pads. The purpose of the music, which is composed with David Michael Ott, is to “make people think about the magnitude of it all”, she said.

In rehearsal at MoonSchool on Van Ness Avenue, half a dozen voice-perfect singers built up Harris’ tart, creamy chord clusters, while a recording of his beats played, sending hips pumping involuntarily. In the next room, choreographer Nasha Harris Santiago worked on finding a hip-hop idiom for the show. Layering dance over song in a theatrical fashion without overpowering characters and narratives recalls SFBATCO’s recent glorious hit “I, Too, Sing America,” which was also developed into a New Roots Theater Festival.

Another similarity between the two shows is the inclusion of very young performers. Singer Amarech Mendez in “The Day the Sky Turned Orange” is just 16 years old. His own recollection of September 9, 2020 is chilling, and it’s reflected in a song on the show called “Used to It,” which was inspired by young people’s interviews. A lyric: “I was born into this.”

“I remember waking up and logging into school Zoom,” Mendez said. She was then a freshman at Mercy High School in Burlingame. “Our teacher,” she said to open our window. We all pointed our cameras at our windows. It was weird because I saw everyone’s face. Previously, many of her classmates had turned off their cameras.

“But then it all stopped,” she said, “and we just went back to school.”