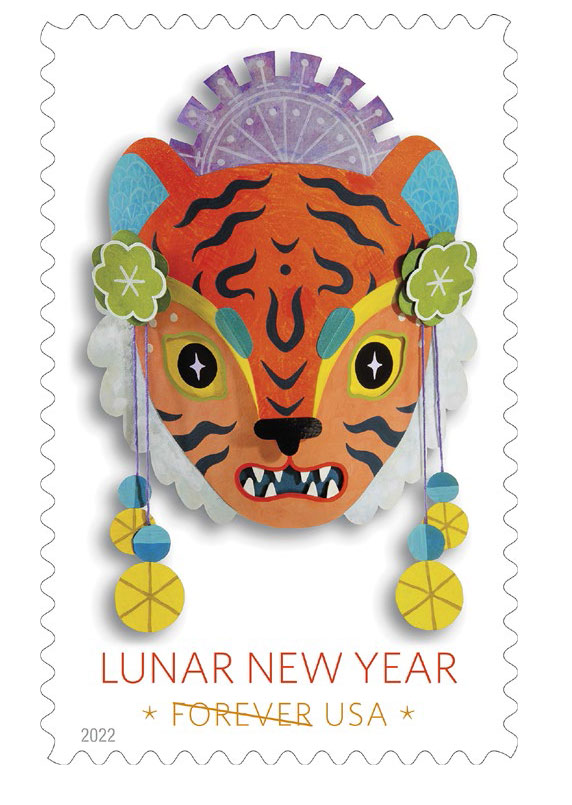 January 22, 2022 – NEW YORK – Ahead of the Lunar New Year, the US Postal Service issued a new Forever stamp honoring the Year of the Tiger during a ribbon-cutting ceremony at the Peter Norton Symphony Space in New York.

Stamps are on sale now at post offices nationwide and online at usps.com/stamps. The news of the stamps is shared with the hashtag #LunarNewYearStamp.

“Celebrating the Lunar New Year fits perfectly into great American cultural traditions. It’s time to prepare for a fresh start while honoring the past. … This is an opportunity to welcome good luck and prosperity,” said Ronald A. Stroman, a member of the USPS Board of Governors, who served as the dedicating official for the stamp ceremony.

He was joined by Michelle Yun, vice president of global arts programs and director of the Asia Society Museum, and Anne del Castillo, commissioner of the New York City Mayor’s Office of Media and Entertainment.

“The Lunar New Year is a time when Asians and Asian Americans honor their cultural heritage and traditions, and this stamp series celebrates their significance and influence on United States history and culture,” said del Castillo.

The tiger is the third of the 12 animal signs of the zodiac associated with the Chinese lunar calendar. Many ancient fables and legends explain the origin of the signs of the zodiac. The most common story is that animals run across a river to determine their order in the cycle. The rat crossed by straddling the back of the ox, jumping ahead at the last minute to win the race. Next come the ox, then the tiger, the rabbit, the dragon, the snake, the horse, the ram, the monkey, the rooster and the dog, followed by the boar in last place.

As with other zodiac signs, personality traits and other attributes are often associated with people born in the year of a particular animal.

Those born in the Year of the Tiger can be seen as brave, confident and well-liked by others. Blue, orange, and gray are lucky colors for tigers, and yellow lilies and cineraria can also bring good luck. Other life milestone predictions are often based on a person’s zodiac animal sign, including love compatibility, career trajectory, and health outlook.

Lunar New Year is one of the most important holidays of the year for many Asian communities around the world, including the United States, China, Vietnam, South Korea and Singapore. Across these varied cultures, many traditions exist to ring in a new year of luck and prosperity.

Known as Tet in Vietnam and the Spring Festival in China and elsewhere, the Lunar New Year begins on the second new moon after the winter solstice and historically marks the arrival of spring. Filled with symbolic meaning, the colors red and gold appear everywhere during this auspicious time of the year. Red is considered very lucky, while gold is believed to bring wealth.

During the first days of the new year, parades and pageants are common with dancers, acrobats and musicians. The festivities also mark a major occasion for folk artists to make paper-cut crafts for the celebration.

Lunar New Year celebrations culminate on the night of the first full moon after the New Year, known as the Lantern Festival in Chinese culture. In the United States and elsewhere, the festival is marked by large parades and bright lanterns decorating public spaces.

On this holiday, the US Postal Service introduced its third set of Lunar New Year stamps in 2020. This new set will continue through 2031 with stamps for the Year of the Rabbit, Dragon, Snake , horse, ram, monkey, rooster, dog and boar yet to come.

Customers can purchase stamps and other philatelic products through the Postal store at usps.com/shopstamps, by calling 844-737-7826 or at post offices nationwide.

Forever stamps will always have a value equal to the current price of 1 ounce of first class mail.

Information for ordering stamps and covers of the first day of issue are available on usps.com/shop.

The Postal Service generally does not receive tax dollars for its operating expenses and depends on the sale of postage, goods, and services to fund its operations.
Source: USPS

Oregon Brewers Festival returns to the waterfront this summer